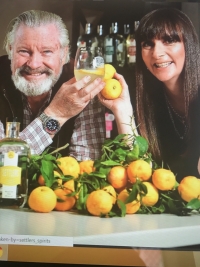 Former master mariner Rowland Short, who entered “all this silliness with gin” after retiring to McLaren Vale a decade ago, says he is competing “with every man and his dog now making the stuff”.

Also searching for a truly SA-centric point of difference is fruit and veg wholesaler Margy Abbot, of AMJ Produce, and the pair have collaborated to create a yuzu gin, using the fresh citrus from a new crop in the Riverland.

They will unveil the yuzu spirit, under the Settler’s label, at the Maximus cellar door on World Gin Day next Saturday.